1) Why take courses in Spanish and Portuguese?

There are as many reasons to study Spanish or/and Portuguese as there are people. Some reasons are very personal, like the fact that they just love speaking other tongues, or the fact that their grandparent's mother tongue is Portuguese. Some other reasons have to do with how the labor work operates today. Everybody knows that mastering a second or third language like Spanish or Portuguese will make a person perhaps twice as much appealing to an employer as the other candidate. For companies and organizations doing business with Latin America it may be strategic to hire someone who can communicate in both Spanish and Portuguese. Besides  the personal, practical or economic reasons for speaking another language you may have, the Department of Spanish and Portuguese believes that studying other languages through literary texts, theater and performance, lyric and music,  film, visual artifacts, philosophy and other cultural objects and texts will provide you with deep intellectual insight into other people's worldviews and mindsets. Those insights are keys to developing your social sensitivity, your inter-cultural understanding, and a more meaningful global citizenship.

Check out this table from ACTFL to identify levels of oral proficiency you could achieve at different stages in our curriculum in Spanish and/or Portuguese. 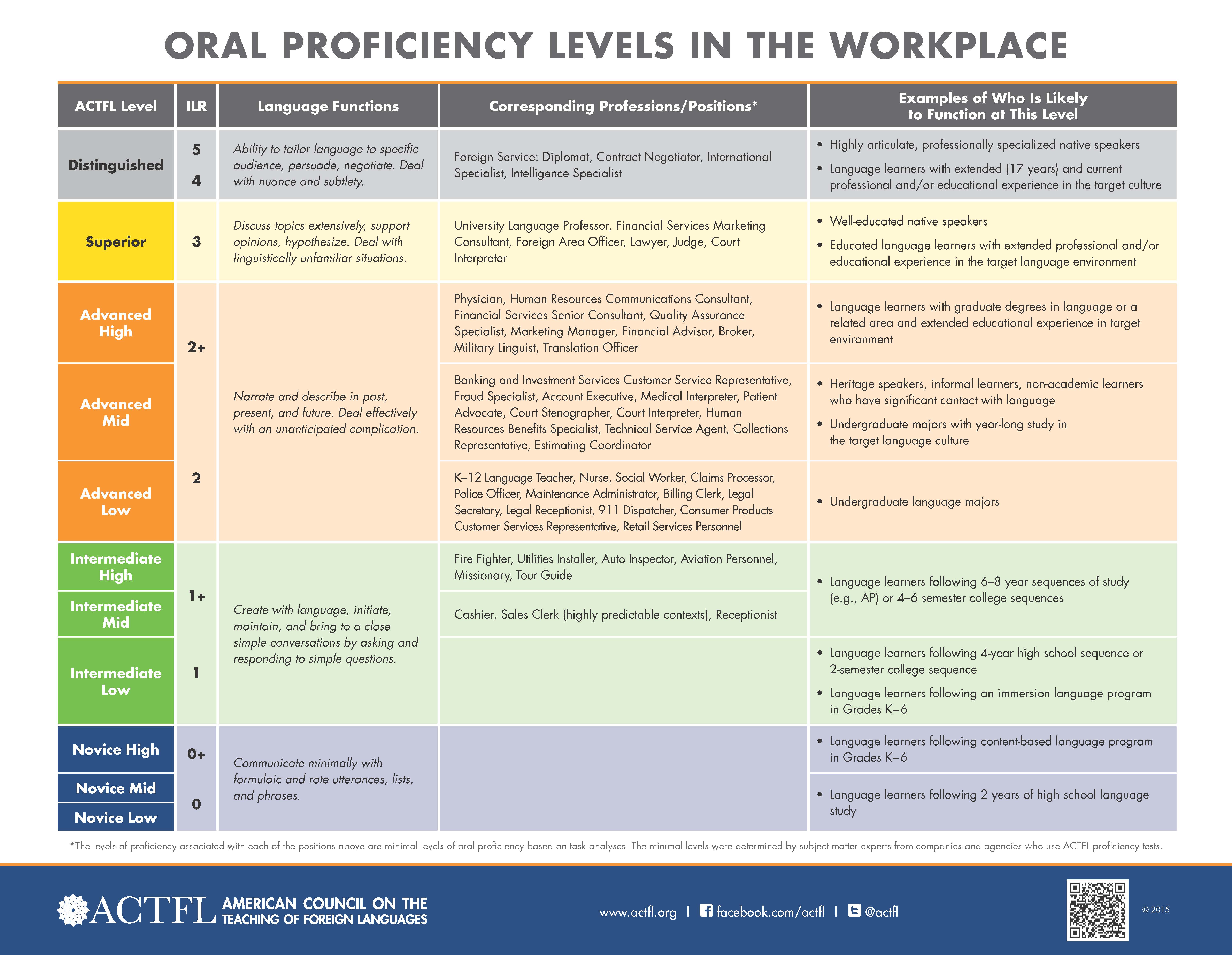 2) How do I meet the language requirement in this department if I know no Spanish or Portuguese?

3) What are drill classes?

Drills are aimed at practicing oral skills and language usage. They are a mandatory component for all languages at 1, 2, and 3 levels. Drill sections meet 3 times a week for 50-minute sessions for Spanish, 4 times for Portuguese. Students sign up during the first week of classes. Times vary, with 7:45am being the most popular and possible times in the afternoon as well (2:10pm, 5:35pm).

4) What are my options if I know some Spanish and/or Portuguese?

Students who have not taken SAT II, AP, British A level or IB exam scores must take the Department Placement exam if they wish to continue with their Spanish studies at Dartmouth. The exam is a series of multiple-choice questions focusing on vocabulary, grammar and reading comprehension and it takes from 20 to 45 minutes. For further information, click here. Students may place
into Portuguese classes by taking
the Portuguese Placement Exam on Canvas. All upper-class students who need to take a placement exam can do so by scheduling an individual time for a placement exam with Rodolfo Franconi, or Carlos Cortez Minchillo.

5) What do I learn when I take an advanced course?

Upper-level courses in Spanish and Portuguese cover a broad range of fields such as film, theater, literature, linguistics, visual culture, dance and music. You will certainly find a topic that touches your heart and arouses your interest: from social movements in Spain to the life and work of Mexican artist Frida Kahlo; from Brazilian TV series to gender and sexuality in Latin/o American Literature and Culture.

Here are a few examples of our rubrics but check our website under courses to see specific content for each term, and what professor is teaching.

This course studies the complex intersections between literatures, languages, cultures and their national, regional, and trans-Atlantic contexts in Spain, Latin America, and the US.  In this course, literary and cultural expressions are studied in relation to place in a wide array of historical contexts.  Issues may include literature and colonialism, "indigenismo," the city/country dialectic, regional and national languages and cultural interdependence, the arts as buffers of political/nationalistic violence, national borders and cultural identity, and the formation of national literatures. Prerequisite: SPAN 20.

Spanish 63.08: The Many Faces of Brazilian Cinema

This course aims to give a comprehensive vision of the richness and diversity of Brazil by introducing its culture and society through the study of Brazilian contemporary cinematic productions.  Topics include: The Other's gaze in Brazil, redefinition of national identity and history, reassessment of African and indigenous roots, concepts of good and evil, rural and urban violence, popular culture, and representations of race and gender. Dist: ART; WCult: NW.

This course will explore how the study of gender and sexuality is integral to understanding the complexities of Hispanic societies and cultures. In addition to analyzing literary texts and cultural and artistic productions, students will also examine theoretical and critical approaches to the study of gender and sexuality. Topics may include feminist movements, the construction and performance of gender, the theories as they relate to Hispanic embodiments and representations in literature and culture. Prerequisites: SPAN 20.

This class explores social, political, and economic issues in contemporary Brazil. Since 2013, the climate in Brazilian society has become more and more tense due to a series of street protests and polarized public debates on race, class, political representation, democracy, religion, gender, sexuality, environmental protection and economic justice. Materials for the course will include films, documentaries, music, and a wide variety of readings (mainstream media, blogs, academic essays, official documents, fiction). Dist:SOC; WCult:NW

6) Are there advisors I can talk to if I am unsure about my plans?

We encourage you to talk to the minor/major advisor (check here to see who is 'on' this term) before you make up your mind about your plans with Portuguese or Spanish. In fact, many students come to the advisors when it is too late to productively solve issues with their plans. If you have questions don't wait until junior year to ask! Come early and discuss potential plans, minor/major possibilities, off campus studies, thesis, etc.

An advisor can be an excellent source of guidance when you are in doubt not only about dates or requirements, but also how to balance your courses to that you are exposed to a variety of area studies (geographies within the Hispanic and Lusophone worlds), theories, topics, and approaches that we strive to offer in our curriculum.

7) What are the differences among the LSA, the LSA+ and the FSP?

LSA programs come earlier in the curriculum and give you the opportunity to finish your language requirement in an immersion setting. Students can enroll in Spanish 20 upon returning from a LSA (no need to take Spanish 9).

If you go on an FSP, you will have already taken Spanish 20 and either of the survey courses Spanish 30, 31, or 32 on campus, so the courses for which you receive credit are more advanced and the topics more specific to the country you are in.

8) What specific off-campus programs does Spanish and Portuguese offer?

We have a total of EIGHT off campus programs in 7 different locations that run yearly. They are distributed as follows:

Two in Barcelona, Spain (W/SP) and One in Buenos Aires, Argentina (W)

One in Cuzco, Perú (F) and one in Santander, Spain (SU)

One in Madrid, Spain (F) and one in Buenos Aires, Argentina (SP)

You may find more information on each of them clicking here: https://spanport.dartmouth.edu/foreign-study

Remember that typically APPLICATIONS are due on February 1, for the next academic year.

9) How do I minor in Spanish or Portuguese?

Students going on the LSA+ take SPAN 20 ABROAD and also two upper level courses (only one of which will give you minor credit).

And then you need 4 extra UPPER LEVEL courses. We have a RUBRIC SYSTEM so you may choose the topics that most interest you, offered each term under the following categories.

You need to take PORT 9 in the context of our LSA+ or PORT 8. This program also offers PORT 10 and 12, both of which count towards the minor.

And then you need 2 extra upper level, which could be…

Here is more information about the Minor:

10) How do I major in Spanish or Portuguese?

The major program in Hispanic Studies consists of at least 9 (nine) courses numbered 20 or higher.

Note: You will only need 7 upper level courses if you go on the LSA+, since Span 20 and 32 are offered off campus, and you can get major credit for both.

You will only need 5 upper level courses if you go on the FSP, since two 30-level courses offered off- campus will give you major credit.

There is an option for a MODIFIED MAJOR in Portuguese. The modified major in Lusophone Studies consists of 10 (ten) courses, at least six of which must be in Portuguese and the remaining four from appropriate major-level courses offered by other departments.

The six Portuguese courses must be distributed as follows:

11) How does the modified major in Spanish and/or Portuguese look like?

The modified major in Hispanic Studies consists of 10 (ten) courses, at least six of which must be in Spanish and the remaining four from appropriate major-level courses offered by another department.

The modified major in Lusophone Studies consists of 10 (ten) courses, at least six of which must be in Portuguese and the remaining four from appropriate major-level courses offered by other departments.

Also, students wishing to pursue a major in Romance Studies must take courses in two of the Romance Languages offered at Dartmouth College (Spanish, Portuguese, French, or Italian), one serving as their primary language, the other as their secondary. This major option will consist of a minimum of 10 (ten) courses beyond the prerequisites listed for the Major in Hispanic Studies or Minor in Lusophone Studies. Six of these courses will be selected among the course offerings of the primary language and four from the secondary. Students will work closely with the Major Advisor in coordinating their course of study.

12) Are there research opportunities in Spanish /Portuguese?

Yes, there are many. The Honors Thesis is of course a culminating experience for majors and offers extensive possibilities of working with a corpus of readings and cultural objects that will take your research skills to your next level.

There are some alternative avenues you may take in order to conduct research.

13) How can I become a drill instructor?

Any student who has passed the language requirement is eligible to teach drill. Training to become a drill instructor begins on the first evening of the term. See the Spanish and Portuguese website for details and contact the Language Program Director for more information.

14) What do I have to do if I want to write an Honors Thesis?

Prepare a written proposal and submit it to your advisor(s) and to the department for approval. The proposal must be submitted in the spring term of your junior year. All students pursuing an Honors Program must take the Honors Course (SPAN 90 or PORT 90) and complete an Honors Thesis (SPAN 91 or PORT 91).

There is a timeline here that will help you manage your time. The thesis proposal should be between 3-5 pages in length, have a tentative title and chapter titles, chapter descriptions and provide a bibliography of at least fifteen entries. Your proposal needs to answer to series of questions detailed in this page.

Check our website for a thorough explanation of the process and goals.

15) Is there student funding for conducting research for my thesis?

Yes, there is. If you are planning to write a thesis you will want to request research funding during the Winter or Spring terms of your junior year, to then use that in the Spring or Summer previous to yours last year. Download this form and submit it to the Chair.

16) Are there classes in English in this department? Do they count for the minor /major?

As a general rule, students may count one upper level course offered in English in a related field toward their major, minor, modified major requirements.
The department offers courses in English, usually cross-listed with other programs/departments like LALACS or AAAS. Check the ORC. Credit for this option will be granted only for a course taken after a student has completed SPAN 20 or PORT 20.
Credit for this course is approved by the department on a case-by-case basis. The course must be on a topic related to Hispanic culture. A written petition to the Chair must be submitted in the preceding term.