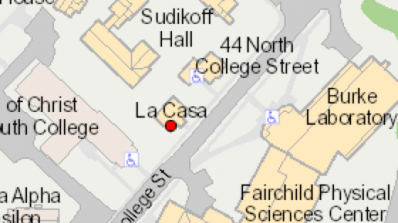 La Casa is an affinity program for students interested in practicing, improving, sharing or maintaining their Spanish speaking abilities and are interested in learning about Hispanic, Iberian or Luso-Brazilian cultures. La Casa also serves the Dartmouth community with open events including movie series, cooking classes, dinners, discussions and conversation hours.

What is La Casa?

La Casa is an academic affinity house located at 42 North College Street that offers housing for up to 10 students. Sponsored by the Department of Spanish and Portuguese, La Casa is designed to serve as a center and meeting place for a wide variety of activities related to Hispanic, Latino, Latin American, Spanish, and Portuguese cultures and languages. These activities will take place over the entire academic year, and can include video and film series, lectures, roundtables, cooking classes and gatherings of student organizations, fiestas, and other extracurricular activities.

The official language of La Casa is Spanish. Residents speak only Spanish in group situations and are strongly encouraged to speak Spanish at all times among themselves, with the Resident Director, and with Spanish-speaking guests.

If you are interested in receiving updates about our events, send us an email to LaCasa@Dartmouth.edu. You can also request to be added to our Orgsync group to stay updated about La Casa.